Rep. Dana Rohrabacher loses endorsement for saying it's OK to not sell homes to gay people 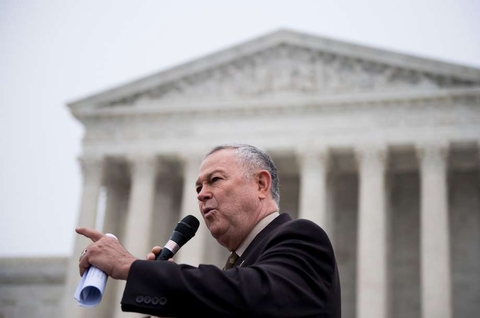 (CNN) -- Republican Rep. Dana Rohrabacher of California is facing criticism and has lost an endorsement from a Realtors group for saying that people should be able to refuse to sell their homes to gay people.

The Orange County Register reported on Thursday that Rohrabacher, who is up for re-election this year, expressed that view during a meeting with a group of Realtors last week in Washington. Wayne Woodyard, who is a member of the National Association of Realtors and met with Rohrabacher last week, told The Orange County Register that Rohrabacher said during the meeting, "Every homeowner should be able to make a decision not to sell their home to someone (if) they don't agree with their lifestyle."

RELATED: Dana Rohrabacher rival takes on his ties to Russia with help from Seinfeld star

The newspaper reported that the congressman did not dispute the account when reached for comment and further added, "We've drawn a line on racism, but I don't think we should extend that line."

Ken Grubbs, a spokesman for Rohrabacher's congressional office, confirmed to CNN that Rohrabacher had made the comments reported in the paper.

In a phone interview with CNN, Woodyard said the congressman said during the meeting that he would not support legislation protecting LGBTQ individuals from housing discrimination on the basis of their sexual orientation under the Fair Housing Act.

"I told the congressman that we need to add federal protections for the LGBTQ community as the final piece of the Fair Housing Act," Woodyard said, describing the meeting, "and the minute I stopped speaking, he said, 'I just will not support that.' "

In response to a request for comment from CNN, Rohrabacher's campaign spokesman Greg Blair said in a statement that the congressman "does not believe the federal government should force those with strong religious convictions into a personal or business relationship that is contrary to their religion."

The National Association of Realtors has rescinded its support of Rohrabacher.

"After reviewing all new, relevant information, it was determined that Representative Rohrabacher will no longer receive support from NAR's President's Circle," the association's president, Elizabeth Mendenhall, said in a statement. "Making this decision was the right thing for NAR to do; the association's member Code of Ethics is far ahead of Congress on gender identity and sexual orientation discrimination. We certainly hope that Congress will follow the lead set at our recent legislative meetings and support the elimination of housing discrimination based on sexual orientation or gender identity."

The Human Rights Campaign, which describes itself as the largest national LGBTQ civil rights organization, issued a statement criticizing the congressman.

"It is unconscionable that in 2018 that Dana Rohrabacher believes LGBTQ people do not deserve legal protections from housing discrimination. He could not be more out of touch with everyday Americans and his own constituents," said David Stacy, the organization's government affairs director.