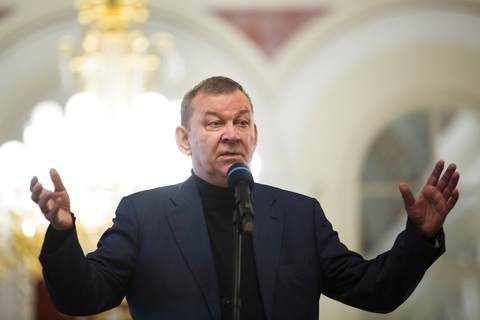 MOSCOW (AP) — Russia's Bolshoi Theater has canceled a much-anticipated ballet about dancer Rudolf Nureyev just three days before the opening night, a development that got many in Moscow's art scene to speak of a return to censorship.

The Russian Culture Ministry on Monday confirmed reports that the decision was announced after the minister had a chat with the theater's director but denied exerting any pressure on Russia's legendary institution.

The Bolshoi announced on Saturday that Tuesday's premiere has been canceled. Bolshoi director Vladimir Urin told reporters on Monday that the production has been postponed until next year, saying the ballet wasn't ready.

The ballet about Nureyev, who defected from the Soviet Union to the West in 1961, was directed by Kirill Serebrennikov, known for bold productions that poke fun at Russia's growing social conservatism.

Urin denied reports that the show had been scrapped because of its frank portrayal of Nureyev's gay relationships.

Serebrennikov was detained and questioned in May in a criminal case over embezzlement of government funds. His supporters dismissed the investigation in which he denied any wrongdoing as a payback from the Kremlin's conservative circles for his pithy satire of Russian officialdom.

In response to numerous anonymous reports that the ballet was banned by Culture Minister Vladimir Medinsky because of its portrayal of homosexuality, the ministry told the Interfax agency that Medinsky had a "long, detailed telephone conversation" with Urin about "Nureyev" but denied applying any pressure on the Bolshoi.

"Censorship and bans are not the style of our ministry," the statement said, adding that it trusts the state-funded theater to decide which shows to put on.

The Bolshoi has been mired in scandal in recent years. Its ballet director Sergei Filin lost much of his sight as the result of an acid attack organized by a disgruntled dancer in January 2012, an incident which exposed infighting within the theater. Urin was hired as director shortly after that.