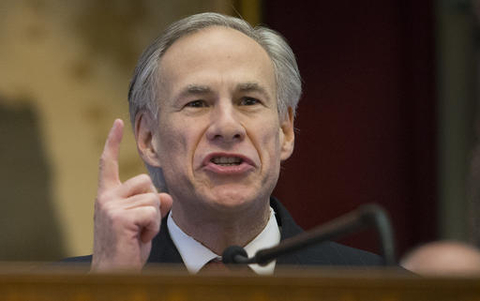 "The NFL needs to concentrate on playing football and get the heck out of politics," Abbott crowed.

He was reacting last week to the NFL which, after Houston hosted a successful Super Bowl, issued a statement branding as possibly "inconsistent with our values" a proposed Texas law requiring transgender people to use the public bathroom corresponding to their birth certificate gender.

But for all his anti-football furry, Abbott didn't actually endorse the bill. He has repeatedly refrained from embracing a measure that would likely face a tough road through the Republican-controlled Legislature even if he were applauding it.

Top business organizations oppose the bill, fearing sports leagues and musicians canceling lucrative events like they did in North Carolina when that state passed a similar measure last year. Texas House Speaker Joe Straus has suggested it's bad for economic growth. And while state Senate overseer and Lt. Gov. Dan Patrick has been its top cheerleader, the proposal has yet to even get a committee hearing — suggesting it could be a tougher upper chamber sale than previously thought.

Upping the political ante were 140-plus rock and Hollywood stars — from Sting to Emma Stone — signing a letter protesting the bill and hinting at future Texas boycotts. Abbott could have helped the proposal's chances but settled for NFL name-calling.

The governor may yet swoop in and fully bless the bathroom bill, but the clock is ticking. In the meantime, here are some other issues to watch this week in Texas politics:

The House Human Services Committee on Monday hears a series of bills aiming to improve Texas' troubled foster system, including a proposal making it easier for relatives to adopt at-risk children.

A federal judge has ruled that the system violated children's constitutional rights and Abbott made overhauling it a legislative priority, noting that 100-plus youngsters died in state custody last year alone. Lawmakers already approved around $150 million to make emergency fixes, but lasting changes will come from bills filed in the House and similar measures working their way through the Senate.

A federal judge has temporarily blocked Texas' attempt to boot Planned Parenthood from the state's Medicaid program over videos secretly recorded by anti-abortion activists in 2015 — but a deadline now looms for another ruling.

The ouster had been set for last month until Austin-based U.S. District Judge Sam Sparks issued an injunction through Tuesday. Sparks is expected to either let the removal proceed or fully block it pending a trial.

After the U.S. Supreme Court last summer struck down much of Texas tough 2013 abortion restrictions, top Republicans switched strategies. Rather than focusing on women's health, like in the past, they are now promoting proposed legislation focused on safeguarding fetuses.

Last week, the Texas Senate Health and Human Services Committee spent hours hearing support for and objections against three such proposals. One mostly bans a common second-trimester abortion procedure, "dilation and evacuation," and is similar to laws that federal courts blocked in Alabama, Oklahoma, Kansas and Louisiana. Another requires fetal remains to be buried or cremated, and the third bars fetal tissue donations, among other things.

The committee convenes again Wednesday and could pass all three bills on to the full Senate.

Abbott didn't make abortion restrictions a legislative priority, meaning no bills on the issue can be approved by the Legislature until 60 days into the session — still about three weeks away.

But passing the proposals quickly through committee nonetheless leaves them poised to speed through the full Senate as soon as possible.
_