What to Watch: Patrick raises profile as session heats up 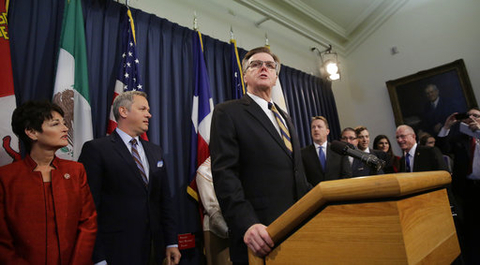 That fondness for media attention was on acute display last week, when Patrick convened three press conferences in barely 24 hours.

He appeared with North Carolina's lieutenant governor to trumpet Texas' "bathroom bill," then faced reporters hours later to promote a proposed "Blue Alert" system meant to notify law enforcement agencies statewide when a police officer is injured or killed on duty. Patrick came back again the following day to cheerlead a second time for public restroom limits on transgender Texans.

Contrast that with Gov. Greg Abbott, who hasn't held a press conference since last year and rarely spares even a few minutes to answer journalists' questions after his public appearances — though he frequently finds time for TV interviews.

Both Patrick and Abbott are up for re-election in 2018 and Patrick has vowed not to challenge his "conservative partner" in the Republican gubernatorial primary. Trying to tamp down speculation of a coming intra-party brawl, Patrick even called a January press conference and implored reporters to write stories about how a rivalry between himself and Abbott wasn't a story.

Abbott, unsurprisingly, didn't respond with his own press conference. If the two eventually run against each other, it's easy to imagine one side summoning journalists to announce that — and the other simply staying silent. While awaiting such a scenario, here are top upcoming issues to watch in the Texas Legislature:

Get ready for busier floor sessions. Rules prohibiting the Legislature from approving most bills beyond "emergency items" directed by the governor expired on the session's 60th day, which was Friday.

That means both chambers are now free to begin hustling through legislation beyond Abbott's four priorities of an anti-"sanctuary cities" bill, a call for a "convention of states" to amend the U.S. Constitution, an overhaul of Texas' troubled foster care system and stricter ethics rules for current and former state lawmakers.

Patrick says the Senate will focus first on approving a parade of pro-police bills. But everyone else will now have time to do awful lot of lawmaking on nearly every issue imaginable.

After the State Affairs Committee lumbered until nearly 5 a.m. last week to approve the Patrick-blessed bill prohibiting transgender people from using public bathrooms of their choice, the full Senate should waste little time passing it.

The real challenge will come in the House, where Speaker Joe Straus says that the proposal could hurt Texas' economy.

The state's leading business lobbying organization has also warned that the "bathroom bill" could cost billions in boycotts and lost jobs — spooked by what happened in North Carolina, which passed a similar measure last year, sparking national outcry and causing lucrative concerts and sporting events to leave the state.

Firms like Facebook and nearly 140 rock and Hollywood stars also have denounced would-be Texas restroom restrictions. Abbott could give House Republicans cover to support the measure, but hasn't said if he fully supports it or not.

On nearly as fast a track in the House is a plan attempting to improve how Texas pays for public schools. The bill pumps $1.6 billion extra into classrooms and its sponsor, Houston Republican Rep. Dan Huberty, says school children statewide can't wait for much-needed changes to how funding is distributed.

His attempt is coming despite the Texas Supreme Court ruling last summer that while deeply flawed, the current system is barely constitutional — meaning lawmakers aren't legally obligated to do anything.

The Senate has shown little interest in tackling school finance. It has instead focused on voucher bills which would offer state funding to families wanting to pull their children from public schools and sent them to private and religious alternatives.

Huberty says vouchers are a dead issue in the House — but that could doom his school finance fix in the Senate. It may prove one of several upcoming instances when the two chambers' conflicting priorities eventually means neither gets key legislation it wants.
_