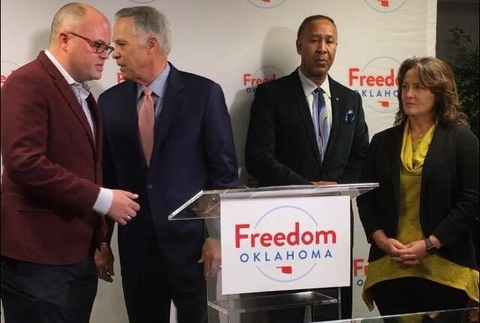 Kirk Humphreys has caught the attention of many over the past couple of weeks. After he asserted on KFOR’s Flashpoint that homosexuality is the reason for moral decline, using Barney Frank to compare homosexuality to pedophilia, the public has paid close attention Humphreys' actions.

Stay caught up with The Gayly's coverage on Kirk Humphreys:
Former OKC Mayor blames homosexuality for moral decline
Is Humphreys apology too little, too late?

In a statement released, Humphreys said, “I regret that my comments on Flashpoint regarding homosexuality were not clear and led some people to believe I was equating homosexuality to pedophilia. That was not my intention or desire. I apologize for my lack of clarity and realize this has resulted in a strong reaction by some and has hurt people’s feelings.”

Despite his apology, demands for his resignation swiftly began to surface.

After the conference, Stevenson backed away from Freedom Oklahoma's demand that Humphreys' resign. “I believe that he made it very clear in his statement to us that he did not believe the same things that he said on Flashpoint,” said Stevenson.

The public demanded to know whether Freedom of Oklahoma was still asking for Humphreys' resignation.

Freedom Oklahoma has responded to critics on social media with the following statement: 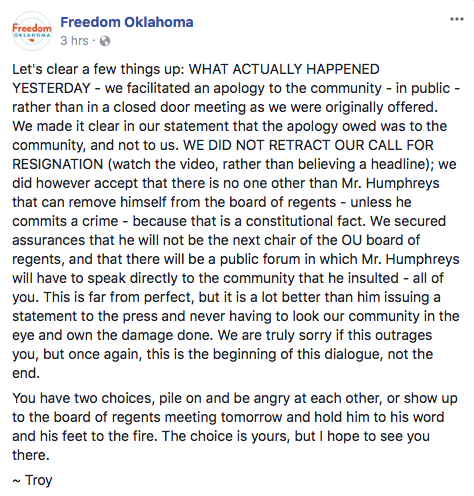 J.D. Baker, OU’s student body president has changed his opinion Humphreys' resignation. “I believe we can move forward in a productive way.”

Though Stevenson and Baker believe this is an opportunity to create a dialogue between opposing viewpoints, many are still demanding Humphreys' resignation.

Below are some of the comments received by The Gayly:

There are some that agree an open dialogue is what is best to move forward:

The OU Board of Regents has called for a special meeting this Thursday in response to the recent controversy surrounding Regent Humphreys' recent comments.

The meeting will be held at Robert M Bird Library in Oklahoma City beginning at 10 a.m.

The Gayly would like to hear your thoughts. Sound off on social media: Do you demand Humphreys' resignation? Or do you believe this is a opportunity for Humphreys to change and move forward? Let us know in the comment section.