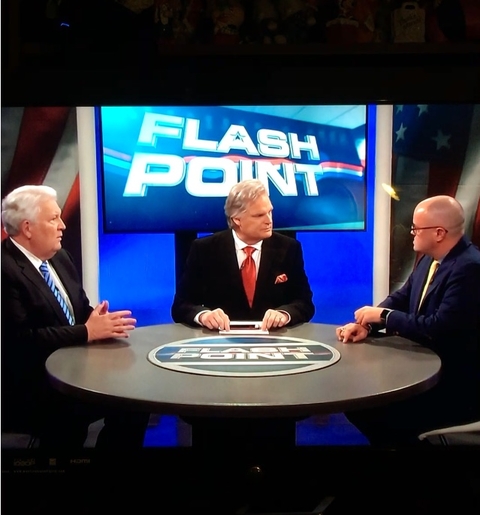 Much has happened in the last week since former Oklahoma City Mayor Kirk Humphreys expressed his contention for “homosexuals” on Flashpoint, a Sunday morning political talk show on Oklahoma’s KFOR.

“I think he was very clear in what he said,” said Stevenson. “There’s only two ways to take it. Either he said that the LGBTQ community was akin to pedophiles, or he was saying if it’s okay and legal for somebody to be gay and be in a gay relationship, then it should be legal for a man to sleep with a young boy.

“Either way, they’re hugely offensive and controversial statements that shouldn't be made by a Regent of the state’s flagship university.”

Moderator Kevin Ogle added, “But he has said he apologized for that.” Read Is Humphreys apology too little, too late?.

Stevenson continued, “When they represent these students; when he is on the board of John Rex Elementary school here in Oklahoma City. One of the biggest problems in our community is that the bias and the discrimination and harassment that goes on with the young folks. And we have higher levels of self-harm and suicide because of statements like this.

“To have a leader of his caliber make those statements and validate those positions can make young people think it’s okay to harass and bully and intimidate members of our community; young people, teenagers, high school students and even college students. It’s just irresponsible.”

Stevenson replied, “I don’t think he was either, but I think making those kind of vitriolic statements…it’s long been proven that the vast majority of pedophiles are straight men married to women.

“To spread that kind of misinformation and blatant lies. I mean, he might have been misinformed, but that doesn’t make it any less of a fallacy.”

Ogle again reiterates Humphreys apology and how he regrets what he said.

Stevenson said, “But I think anybody that watched the show, it was…I mean, it was very clear. There was no lack of clarity in his words.”

“I think she was compassionate and frankly, courageous. Because she didn’t know what was going to happen.”

Turpen continued with an impassioned talk about his respect and acceptance of the LGBT+ community.

Stevenson shared that he dealt with bullying in school and that his first boyfriend committed suicide after being exposed to conversion therapy.

Stevenson plans to meet with Blair Humphries, Kirk’s son, who has disavowed his father’s statement.

Further discussion about Humphreys position as a Regent ensued.

“We want him to resign,” said Stevenson. “We believe he should not be in a position to hire the next president of the University of Oklahoma. We’re not going to back down until we at least get a guarantee that he will not be chair of the Regents. I mean, he cannot be leading this process to hire the next president and have that level of animus to a community that is so prevalent on the campus.”

Stevenson continued, “We believe the more people get to know gay, lesbian and transgender Americans, and Oklahomans, the more there is understanding of our community.

“The first thing we ask for is a true and sincere apology and an opportunity to sit down with Mayor Humphreys and have a public dialogue about this’ to talk about it. He has not reached out; he has not contacted us. Our only resolution was to ask for him to at least not be in positions of power over young people. People from our community he could intimidate and bias.”

Ogle said, “I received an email from Kirk, and he said he would be more than willing to sit down with you [Troy.]”

Stevenson said they are always open to dialogue and communication.

Oklahoma City Public School Board Chair Paula Lewis called for the resignation of Kirk Humphreys from the John Rex Charter Elementary Board saying, “The comments from Kirk Humphreys go against our school district’s values of inclusivity and equality. We believe there is strength in our diversity.”

Read full statement and more here:OKCPS Board Chair, others ask for Humphreys resignation

Even parents voiced their opposition to Humphreys serving on the John Rex School Board:
Parents speak out against Humphreys homophobic remarks

And, in a regularly scheduled meeting of the Oklahoma University (OU) Board of Regents, the matter was briefly discussed. Humphreys was absent from the meeting. Humphreys absent from OU Regents meeting.

Before the meeting, a group of OU students hosted a peaceful protest outside where the Board of Regents meets to garner support encouraging Former Mayor resigning from the Regents board. Students said they would not tolerate bigotry.

Humphreys is slated to be the chairman of the OU regents in 2018-19. As such, he will play a large role in selecting the university's next president.

Love’s Travel Stops, sponsor of Flashpoint, said in a social media statement that they are an inclusive company and Humphreys statements are not consistent with their beliefs. “We are taking this matter seriously and are assessing the future of our sponsorship of this program.”

(Accompanying KFOR video will be posted when available.)