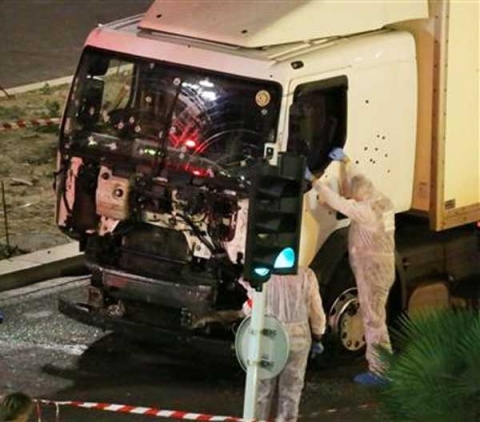 Nice, France (AP) — A large truck plowed through revelers gathered for Bastille Day fireworks in Nice, killing at least 84 people and sending others fleeing into the sea as it bore down for more than a mile along the Riviera city's famed waterfront promenade.

The driver was killed by police and no one immediately claimed responsibility for the Thursday night attack on France's national holiday, which rocked a nation still dealing with the aftermath of two attacks in Paris last year that killed a total of 147 people.

"Terrorism is a threat that weighs heavily upon France and will continue to weigh for a long time," Prime Minister Manuel Valls said after an emergency government meeting Friday. "We are facing a war that terrorism has brought to us. The goal of terrorists is to instill fear and panic. And France is a great country, and a great democracy that will not allow itself to be destabilized."

The truck plowed into the crowd over a distance of two kilometers (about 1.2 miles), a lawmaker said, and broadcast footage showed a scene of horror up and down the promenade, with broken bodies splayed on the asphalt, some piled near one another, others bleeding onto the roadway or twisted into unnatural shapes.

Some tried to escape into the water, Eric Ciotti, a lawmaker for the region that includes Nice said Friday, giving new details of the horrifying last minutes of the attack.

"A person jumped onto the truck to try to stop it," Ciotti told Europe 1 radio. "It's at that moment that the police were able to neutralize this terrorist. I won't forget the look of this policewoman who intercepted the killer."

Wassim Bouhlel, a Nice native, told The Associated Press that he saw a truck drive into the crowd. "There was carnage on the road," he said. "Bodies everywhere." He said the driver emerged with a gun and started shooting.

The regional president, Christian Estrosi, told BFM TV that "the driver fired on the crowd, according to the police who killed him." He said more than 10 children were among the dead.

Flags were lowered to half-staff in Nice and in Paris, and President Francois Hollande extended the state of emergency imposed after the November bloodshed another three months. The government declared three days of national mourning to begin Saturday.

Interior Minister Bernard Cazeneuve, who traveled to the scene, said police were trying to identify the driver. Ciotti said identification papers were found in the truck and that investigators were trying to determine whether they were legitimate.

Partiers in summer apparel ran for their lives down Nice's palm-tree-lined Promenade des Anglais, the famous seaside boulevard named for the English aristocrats who proposed its construction in the 19th century.

"France was struck on the day of its national holiday, July 14, the symbol of liberty," Hollande said early Friday, denouncing "this monstrosity" — a truck bearing down on citizens "with the intention of killing, smashing and massacring ... an absolute violence."

Hollande said it was not immediately clear whether the driver had accomplices. The Paris prosecutor's office opened an investigation for "murder and attempted murder in an organized group linked to a terrorist enterprise."

Estrosi said some of the city's 1,200 security cameras had pinpointed the moment the attacker boarded the truck, far from the seaside "in the hills of Nice" and could follow his path to the promenade. Estrosi called for the investigation to focus on any accomplices.

"Attacks aren't prepared alone. Attacks are prepared with accomplices," Estrosi said. "There is a chain of complicity. I expect it to be unveiled, discovered and kept up to date."

Hollande called a defense council meeting Friday with key ministers, and will head to Nice after that.

Cazeneuve said "we are in a war with terrorists who want to strike us at any price and in a very violent way."

France has lived with soldiers in the streets since the November attacks, and much of the country was under intense security during the month-long European football championships, which ended July 10 without incident.

Video footage showed men and women — one or two pushing strollers — racing to get away from the scene. Photos showed a truck with around 20 bullet holes.

Writing online, Nice Matin journalist Damien Allemand, who was at the waterside, said the fireworks display had finished and the crowd had got up to leave when they heard a noise and cries.

"A fraction of a second later, an enormous white truck came along at a crazy speed, turning the wheel to mow down the maximum number of people," he said. "I saw bodies flying like bowling pins along its route. Heard noises, cries that I will never forget."

On video footage, one person could be heard yelling, "Help my mother, please!" A pink girl's bicycle was overturned by the side of the road.

Hollande announced a series of measures to bolster security. Besides continuing the state of emergency and the Sentinel operation with 10,000 soldiers on patrol, he said he was calling up "operational reserves," those who have served in the past and will be brought in to help police, particularly at French borders.

He reiterated that France is also bolstering its presence in Iraq and Syria, where he said earlier that military advisers would be on the ground to help Iraqis take back the Islamic State stronghold of Mosul.

President Barack Obama condemned what he said "appears to be a horrific terrorist attack."

European Council president Donald Tusk said it was a "tragic paradox" that the victims of the attack in Nice were celebrating "liberty, equality and fraternity" — France's motto — on the country's national day.

France has long known it is a top target for the Islamic State group. In September 2014, then-spokesman Abu Mohammed al-Adnani referred to "the filthy French" in a statement telling Muslims within the country to attack them in any way they could, including "crush them with your car."

France has been not only a prime target for Islamic State, but has seen more young Muslims head to join extremists than any other European nation. And Nice has been at the center of the movement, home to one of the most prolific creators of jihadi recruiting videos for the French-speaking world, a former petty drug dealer named Omar Omsen who is now fighting in Syria.

The Islamic State group carried out the November 2015 attacks, sending a group of largely French-speaking men to strike at France's national stadium, bars and cafes and the Bataclan concert venue. In March, the same Islamic State cell struck in Belgium.